In November 2013, two expat teachers – Siobhan and Laura – decided it was time for the girls in Saigon to have an excuse to run around in the hot sun kicking a ball. Both having played Gaelic football in other countries, they decided to put the word out to see if anyone would be interested in joining this relatively unknown (to non-Irish people!) sport. Initially, there was a solid band of around 8 girls that came down for a kick and a run, which grew to 15 in about 6 months. Fast-forward to 2015, and the Ladies Saigon Gaels has a regular training membership of around 30 girls. 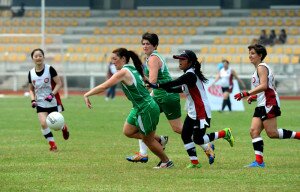 Having trained (and partied) alongside the Vietnam Swans Saigon chapter for a year, the Ladies Saigon Gaels officially merged with the Swans in November 2014, with fantastic support from then-Swans President, Josh Lee. There is now a Saigon Gael representative on the Swans committee, and the two teams continue to train, tour and hold social functions together. In addition, the Swans and Gaels regularly hold mixed AFL and international rules (hybrid AFL and Gaelic football) matches, as well as a mixed AFL 9’s tournament in Saigon from November to January.

The Saigon Gaels are an inclusive club, with players coming representing 6 different nationalities. Most players had never watched a game of Gaelic before joining the team, but enthusiasm, dedication and enjoyment of the sport has resulted in huge improvements in skills. In their first year as a team, the Gaels have had some great wins against their northern counterparts, the Viet Celts, and their highlight was winning the Junior Plate against 10 other teams at their first ever Asian Gaelic Games.

The Gaels welcome players of all nationalities, sporting backgrounds and playing abilities, and accept new players year-round. For more information, see or “like” them on Facebook at .

If you are interested in becoming involved with the Gaels, email .