When the Swans needed a tour leader for an upcoming Thailand tour, token Canadian Vaughan Swart duly put up his hand to organise the squad for their final international match ahead of the , held in Ho Chi Minh City on October 15th.

Here’s his take on this weekend’s tour:

After a 1-1 start to the second half of the season, the Swans are heading to Bangkok for a big weekend both on and off the field. A one on one match with the Thailand Tigers has evolved into a three-way with the Cambodian Eagles. 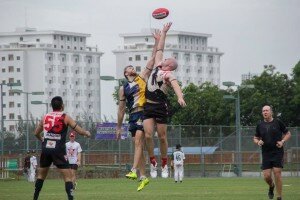 How many times will the Swannies have to play Cambodia this year?

Each team will square off in a one hour game against the other two, with the best team on the day taking it all. The Tigers have been relatively absent from the Swannies schedule in 2016, but we’re hoping with our large squad we can put the tiger puppies back in the temples freezers. As for the Eagles, this will be our third encounter of four in 2016 (including the Indochina Cup in November) so most of the squad should know what to expect there.

The Swannies are coming in hot off some massive training sessions by Timmy Burdeu. The man can breed like a rabbit and run the boys like it too. On the field, players are falling into a more structured style of play that we hope will carry through this weekend all the way to Champs.

The Milner boys are hitting their strides into the leadup to Champs!

Boys to look out for are newcomers Tom “it’s my birthday” Robinson and Tristan “it’s my first day” Robinson, who are sure to light it up. The much vaunted Milner brothers are taking a break from cheesecake baking to run the Tigers and Eagles ragged. We’ll even have three local boys making the trek to see the green turf, bright lights and dark alleys of Bangkok, including Joey who rejoins us on tour after a break in 2015 and 2016.

A tour to Bangkok is rarely a tame affair, but could this one be the Swannies’ wildest yet? Perth-bred legend Andy Glendinning is taking the leap in to wedded bliss next week, and a large contingent of Swannies are determined to throw one of the game’s best speech-makers an epic buck’s party never to be remembered. With the crystal slippers set to 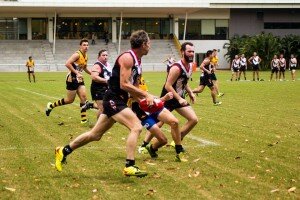 We’re sure to see an electrifying performance from Andy G at some point on the weekend.

be passed to Tom at midnight when it becomes his birthday, the night out promises to be a big one. Will Gus survive his 76th tour to Thailand? Who will be responsible for taking Bill back to his room? Will Lukey T ever be allowed on tour again? Will Jimmy end up hospitalized for another 2 weeks? ONLY TIME WILL TELL!

Stay tuned for the post-match writeup!