The Vietnam Swans are delighted to announce that at yesterday’s AFL Asia Annual General Meeting, it was confirmed that the Swans would host the 17th AFL Asian Championships at RMIT Saigon campus on Saturday 15 October, 2016.

This will be the first time that the Swans will have hosted “Asian Champs”, which saw over 400 competitors travel to Bangkok in 2015. The new two-division format with a 12-a-side second division was hailed a big success in Bangkok and will be continued in Saigon.

“The Swans are excited to be hosting this years Champs and we can’t wait to welcome all of AFL Asia’s Clubs to Vietnam”, Swans President and AFL Asia Vice President Grant Keys said.

“With the strong support we enjoy from RMIT University, we will provide a world class facility with an Australian-standard playing surface, function rooms and entertainment areas, which along with Vietnam’s famous hospitality and affordability, will offer teams and their families and supporters a memorable Champs.” 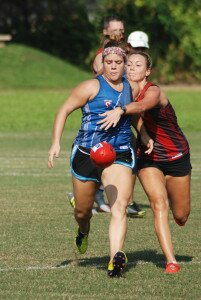 Swans to host first ever Women’s AFL Game in Asia

As part of the Champs, the Swans are also excited to announce their intention to host what is believed to be the first ever official game of women’s AFL in Asia, with a Vietnam vs Rest of the World game being proposed.

“We pride ourselves on being the most inclusive Club in Asia, formed behind the close relationship we enjoy with our Saigon Ladies Gaels and Viet Celts Ladies sister clubs. We look forward to seeing these girls unite under a Swans banner this year and take on the world.” Keys said

“Some may argue our Club has evolved a little faster than others in Asia, so when Maz came to me with the idea of us hosting a women’s game it was a no-brainer. We were the first AFL Asia Club to include a woman on our Senior Squad in ACT representative Penny Wilmot, the first to have a woman on our executive committee in Maz Scanlon, the first to operate a mixed 9’s league, we regularly train with the girls and encourage partners and families to tour with us.

“We hope by signalling our intention to host the first ever Women’s international in Asia we will encourage many other teams around the region to develop their own women’s footy programs and invite their ladies along to Saigon with them” Keys said nervously, as his wife dusts off her footy boots. 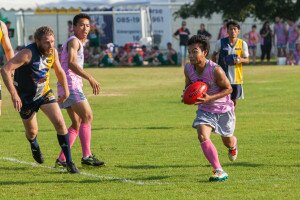 Following the success of AFL Asia’s local player development initiatives at the 2015 Champs that saw Andrew Embley travel to Bangkok for a pre-Champs clinic with a record 40 local players, the Swans will look to build upon these with further coaching clinics on the Friday and another East vs SE Asian local player feature game.

“Unfortunately as Clubs have indicated they would prefer not to play on the Friday or Sunday, we are limited in how much we can grow Asian Champs, but we making local player development a big focus of the Swans this year and will be looking hard at the schedule to see how we can fit in as much as possible over the Saturday and where possible, Friday. We have also started to look into entertainment options with our Events Manager Maz, who is keen to put on the best post-game party Asian Champs has ever seen. How good would an Aussie band at the ground band be!” Keys hinted, as his Treasurer motioned nervously in his desk chair.

With experienced former AFL Umpire and Intercontinental Westlake GM Adam McDonald announced as Head Official at this year’s Champs, the development of AFL Asia’s umpires in the lead up will also be a key area of focus. The Swans have proposed to AFL Asia our intention to help support AFL accreditation for umpires officiating at this years Champs.

More information and a prospectus for all AFL Asia member clubs wishing to compete at the 2016 will be available in the coming months. Like the for regular updates throughout the year.

Top: Thanks to Ross McRae

Middle and bottom: Thanks to Rob Brewer http://ardmawrphotography.zenfolio.com/