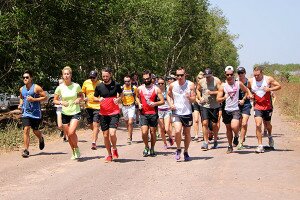 It all started so well…

The annual Vietnam Swans ANZAC Vung Tau Bootcamp was held over two days this year with over 30 participants including plenty of new faces. This event continues to grow each year, helped in no small part by the Saigon Gaels who outnumbered Swannies this time bringing along 12 girls!

The weekend kicked off Saturday morning and for just the second time we decided to do the 5 (or 6) km run around the hill at the iconic Long Tan cross. This course follows a gentle sloping road taking participants on a relaxed, scenic tour of the site past Vietnamese farming properties and has proved far more popular than the arduous Mary to Jesus run held previously. 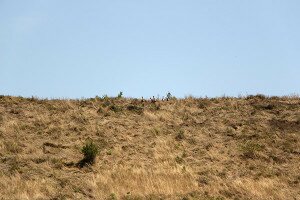 …and then this happened.

After getting directions from Dan that went something like “You go down there, go left then right then you’ll see the road, you can’t miss it!” the pack set off with experienced Swans Tim B and Billy leading the way. As it turns out you could miss it… The entire group, including several who did this exact same course last year, got to the first fork in the road and pulled a hard left into the Vietnamese wilderness.

Meanwhile… the support crew prepped the cameras, loaded bikes with water and set off to record the event. Once on the road (found easily the first time) there were no Swannies or Gaels to be seen. After a few runs up and down the road it was clear the group had made the misguided decision to go off road. 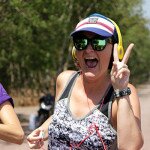 Sweet photo of Maz from Stereosonic last year I think.

Using the zoom of the camera they were finally spotted making their way up the hill, making them likely the only foreigners on this soil in around 50 years. While the support crews biggest concern was unexploded landmines and poisonous snakes the biggest dangers turned out to be rampaging cows and the meter deep prickly bushes, with some of the runners looking like they’d just walked off the set of a horror movie.

On a positive note the run was shortened to around 4km with Bart finishing first, recording a personal worst time for the distance of 42 minutes. JD, who flew in just for the chance of another trip to ‘Vung Wow’, finished a close second with Tim B rounding out the group. An extremely pissed off Laura finished first for the girls in 48 minutes, providing quote of the weekend “who the fu*k organized this??”.

With the ‘run’ done it was time to head to the beach for a fitness session overseen by Tim B. After the ordeal everyone had just been through it was decided, in the interests of morale, to keep this pretty relaxed – which in Timmy B’s mind includes a short torture session of burpees, planks and squat jumps. Big congratulations to Alyson who won the sand eating competition during the wheelbarrow race. 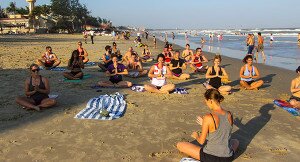 After the fitness we were lucky enough to have the Vietnam Swans official yoga guru Mary there to take us through a few poses. While a few of the boys barely managed to get into even the most basic positions, most of the girls and Gus proved to be more than up to the challenge. Heaps of positive feedback from this initiative that we’re hoping to include more of throughout the year.

Saturday night was Gus’ time to shine, taking us on a tour of some of his favourite Vung Tau night spots, including the beautifully named and aptly punworthy “Bearded Clam”. Multiple rounds of killer pool ensued, with the competitive nature of the Swans and Gaels shining through.

We rounded out the weekend on Sunday with a couple of mixed scratch matches at Lam Son Stadium, one Aussie Rules and one Gaelic. While the girls continue to impress with the oval ball the most encouraging aspect, especially in the lead up to the Central Vietnam Games, was that it looks like some of the boys are finally beginning to get the hang of the round ball.

The bus ride home was unusually quiet for a Swannies road trip as the driver forgot to stop to pick up the usual allocation of beer, but thankfully we did manage to get him to stop for pikelets and ice-cream at the milk stop, bewm!

The Vung Tau boot camp once again proved to be a calendar highlight, and a great way to get excited ahead of the mega ANZAC Friendship Match vs Jakarta on 23rd April. Honk!