Last night was the deadline for footy players who wanted to play for the Swans in the Champs to put up their hands.

The General, Travel Trav Fennell, stuck up his hand. Has gone into battle for the Swans at home on many occasions – on and off the field. On the field he has anchored the backline and taken command. Those around him lift by a conservative 10 per cent. Unfortunately, the world beating pies have taken their toll on the big fella (“yeah, they are good, aren’t they!”). This will be Trav’s first international tour with the Bloods so expect big things. Has even pie floated the idea of a match winning performance at full forward… What does Super Savvy have to say about that?

Eddie Raygoza is new to Aussie Rules but did play in the much talked about clash between Saigon and Hanoi back in April, prior to AusCham’s Big Day Out. Probably happier to throw the ball than punch it. However, this piece of tall timber can control the skies and get the ball to the little fellas streaming down the ground deep into attack. 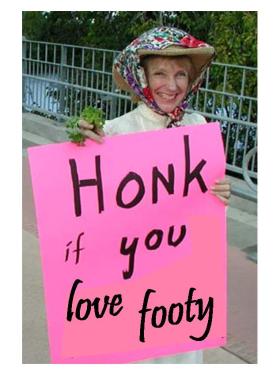 The 44th to confirm was Peter Grave. We all have a lot to learn from Peter because we haven’t seen him before. He’s recently landed in Saigon and, with this city being gripped in Footy Fever (read AsiaLIfe magazine’s  article if you don’t believe me), Peter couldn’t help but get caught up in the feeding frenzy. So, he’s now signed up by email. Has threatened to turn up for his inaugural training appearance on Sunday. Says in the email that he hasn’t played for a while and will probably pick up some water running and boundary umpire duties on the day. Expected will become a huge part of the Club.

Applications for field umpires (even for just one of the games), spectators and to just help out on the day are extremely welcome!

This entry was posted on June 15, 2007 at 7:45 am and is filed under Asian Champs, Aussie Rules. You can follow any responses to this entry through the RSS 2.0 feed. You can leave a response, or trackback from your own site.