Bushfire jumpers to be auctioned 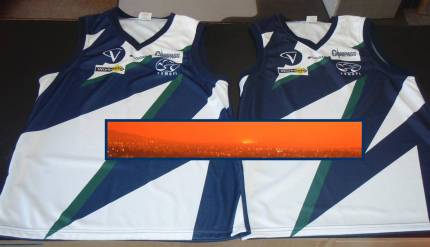 The two YVMDFL bushfire jumpers to be auctioned

Following a request from the Vietnam Swans, the (YVMDFL) is posting two of its inter-league jumpers to Saigon for the Bushfire Bash – for Cash! appeal that will be held at Cafe Latin from 6pm on Friday 27 March 2009.

Many of the communities in the YVMDFL, including Kinglake and Marysville, were devastated by the Black Saturday fires.

Stephen Walter, the CEO of the YVMDFL, said he had been unaware of the number of footy clubs outside of Australia and was moved that clubs like the Bali Geckos and Vietnam Swans wanted to do something to help. He described the five weeks since Black Saturday as being deeply traumatic – but also incredibly rewarding as communities rallied to support those less fortunate.

The two donated jumpers will be auctioned on 27 March at the Bali Geckos-Vietnam Swans function. Both  jumpers are likely to be signed by ex AFL players who now play in the YVMDFL.

If you would like to offer a raffle prize, please email .

The Sheraton Hotel offers Dinner for Two at the Bushfire Bash - for Cash!

has just confirmed that it will support the Vietnam Swans and Bushfire Bash – for Cash!

The Sheraton Saigon Hotel & Towers has generously offered Dinner for Two as a raffle prize when we hold a fundraiser at Cafe Latin, 19 Dong Du Street, Saigon on Friday 27 March from 6pm.

The fundraiser, on the eve of the Vietnam Swans Vs Bali Geckos match, will raise money for the which covers the worst hit areas in the Black Saturday Bushfires.

The Vietnam Swans and Bali Geckos sincerely thank the Sheraton Saigon for its generosity.