Tales from a northern city

Last night Super Savvy warned his players in Hanoi that he would be up there in Hanoi for Thursday night’s training session.

Coincidentally, the rumour mill started spinning at a feverish pace this afternoon when the anonymous confessional email was received from a player suffering the guilts:

My fitness campaign was going well up to last night when I hit the Sheraton buffet; and let me tell you I hit it hard… Biggest heart burn that I have ever experienced was last night… Truck me, I thought I was going to die.

All the same, it was a great buffet!

Full back but prone to lapses in concentration. Has failed to submit his stats for weight, height and age to the match committee.

However, when he’s in the zone, carrying the weight of a General, he can split a pack. He can also skip across the ground as lightly and as gracefully as a gazelle! 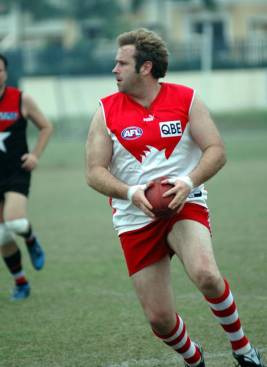 Trav’s just returned from a 10 year reunion in Australia with his Leongatha footy club, so we’re tipping that the smell of leather and glory is fresh in his nostrils.

The young guns on the other teams will be in for a shock.

This entry was posted on July 2, 2007 at 10:57 pm and is filed under . You can follow any responses to this entry through the RSS 2.0 feed. You can leave a response, or trackback from your own site.